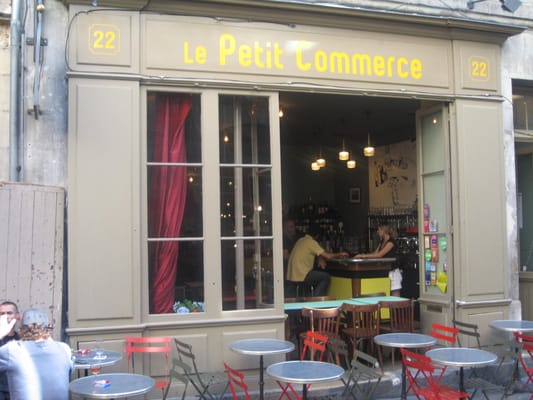 The Petit Commerce, a bistro specializing in seafood, reminds me of two points regarding the city of Bordeaux that are not necessarily the first that come to mind when I think of this capital of wine.

First, Bordeaux is a port city and as such, has a rich culinary tradition surrounding fish and shellfish.   Although officially located on the river Garonne, it is very near the river’s mouth and therefore close the rich fishing of the bay of Biscay.  Bordeaux is also in the center of one of the most renowned oyster producing regions in France, very close to the famous oyster beds at Arcachon and around Oleron.
Second, Bordeaux is close enough to both Spain and the Basque countries that its cooking reflects some of these regions culinary traditions.  In this case, I am thinking of cooking on a “plancha” or flat topped grill.  Its a very simple, rustic way of cooking that adds a rich, caramelized, note to any ingredient.  And one finds it often in Bordeaux.

At Le Petit Commerce, the concept is simple:  very fresh fish, mostly whole, cooked on the plancha and served with the “puree maison” (a rustic version of mashed potatoes crushed with olive oil) and vegetable of the day (which varied on different nights…multicolored carrots were especially good).   The daily choices, which usually number 15-20 fish and an equal number of crustaceans, are listed on a chalk board.  On different visits, we enjoyed huge mahogany shelled clams, pink prawns, razor clams, octopus, soles of various descriptions,  sea bass, and fishes with names like chevalier and merluchon, who’s identities in English go unreported.

The same owner has recently opened a shellfish bar directly across the street and diners at either restaurant can request dishes from the other…so you can start your meal with local oysters on the half shell or a plateau de fruites de mer  that might include raw oysters, clams, mussels, crab, shrimp and sea snails.  Note to the wise:  beware as you approach the front door…harried waiters carrying plates from one restaurant to the other explode into the street at hard to anticipate intervals.

Service can be brusk but I don’t take it personally…Le Petit Commerce seems always full and perpetually understaffed, although the staff that is there is working at full speed.  I take the lead of the surrounding tables of appreciative Bordelais, who spend more time savoring the fish and well priced wines with friends and less worrying about where their server got to.

Do make a reservation;  If not, you will likely end up in the back dining room, accessed via the cellars, along with over large parties of Japanese tourists.

This entry was posted in Restaurants and tagged Bordeaux, Fish, France, oysters, Wine. Bookmark the permalink.